Let’s Get Phygital! (My view on screen time and gadgets)

The length of “screen” time is a common discussion amongst parents. Educators relate the effect of diminished attention span. A grandmother mentioned how her grand daughter had eyeglasses by 3 because of using the tablet too long. On the other hand, some parents say how their kids learned their alphabet from their tablet or even learned playing the guitar from You Tube.

There are many articles written about the effects of technology to children’s development. Below are my views based on my own personal experience with my children:

For the first 2 years, I concentrated on building skills from physical toys. I believed it was the best way to stimulate my child’s sensory development. This means my child is able to use his or her 5 senses effectively. When I teach colors, I prefer to use blocks where they can see the colors, touch and hand me the correct color and hear a familiar voice when I give instructions.

I was always conscious about active learning vs. passive learning. I always felt when the “screen” teaches concepts, my child sits and listens but have no interaction when they learn the subject matter. I would reinforce the words and pictures seen and repeat them with my own voice or sing the song along with them.

For me, media is a great source of information. For example, I wanted my kids to have early exposure to the Spanish language. I used Brainy Baby videos and CD’s for this. I wanted my kids to speak the proper English. I have a lot of audio storytelling CDs for this. Although learning media is available on tablets, I still preferred using DVDs because I can control the time more effectively.

I personally saw the effect of too much video. I remember my son liked a cartoon character when he was 4. I allowed him to watch more of it. After just one month, I noticed he was not listening as attentively and seemed fidgety to me. I decided to “wean” him off. I got the physical character toy and played with him while watching his video. Then I would make our own pretend play after the video is done. I slowly shortened the video time and transformed it to physical playtime again. I noticed his focus slowly came back.

Until my kids were 3, I tried to show them videos with “real” images vs. cartoon images. I specially loved DK videos about dinosaurs and solar system. I was cautious about videos with fast motions.

My kids are picky eaters. It would be easier to lure them with the “screen” to finish a meal. I saw this done by the nanny and initially felt that it was okay. Then I saw the “passiveness”. I cut it cold turkey.

Now my kids are 10 and 7. They love their shows in You Tube, Piano Tiles and Slither.io. For them, it is their relaxation. I tried different rules. In the end, I found the most effective was, screen time only on non-school days. I realized that kids appreciate rules when they are involved in setting them. I also let them see the effect for themselves. There were days when they had too much. They would be cranky or tired. I would challenge them and say – If you are supposed to relax, then why do you feel more tired?

I also go back to their goals for the year then discuss the rules they think are appropriate. Now, my daughter is the one who tells me to keep her gadgets for the week and just give it to her during weekends.

During my son’s Handy Manny stage, I gave my son tools. When my daughter enjoyed Nerdy Nummies, I would have baking tools available. After watching, I lead them to the physical activities. And this is where I feel “Application Learning” happens. 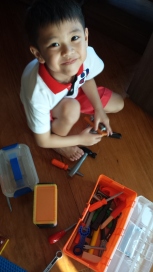 Children’s programs now differ from our preferred values, I would watch their cartoons with them and decide if they are allowed to watch the shows.

I show my kids to make their own content. I compiled Photos from Avalon, Singapore and San Diego zoos and used IMovie to make a video while putting the name of the animal and saying it with my voice. 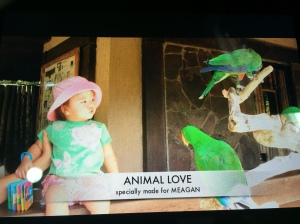 Now, game nights can be spent making videos – They can pretend to be a newscaster or make their own show.

This is my most favorite discovery. My daughter likes to watch Maddie Ziegler (the girl who danced in Sia’s videos). Then she began dancing on her own. Later on, she asked to have dance lessons but did not like classical ballet. It was a good project for us to find a teacher. Find You Tube videos to explain to the teacher. Now, she enjoys her class and gets to show me her own choreography.

In conclusion, I believe my kids benefit from a “Phygital” world. Technology’s main purpose for me is a tool for information and entertainment. The physical world of toys and human interaction remains to be my primary source of overall learning. I love that my kids are able to know that a topic can be learned in multiple ways.

Now, their “Phygital” world becomes OUR “Phygital” CONNECTION. I can’t hate technology for that.

This site uses Akismet to reduce spam. Learn how your comment data is processed.